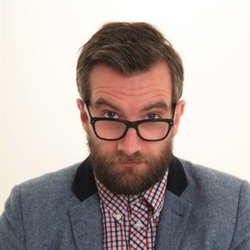 'A Frankie Boyle you could actually book ... hilariously brutal' (Chortle.co.uk). Life: the way things were, are and definitely shouldn't be. Scotland's comedy dynamo rips through the trials of modern existence like Wile E Coyote on the scent of Roadrunner. His unique gatling gun-style delivery and surreal take on the world around him makes him one of the most popular comedians on the UK circuit. 'Fizzing with energy and spewing out one-liners like he had just scoffed a dodgy prawn, Pirie is a man we will be seeing more of' (Daily Record). 'A class act' (Herald).

Comedian Paul Pirie makes his highly anticipated return to The Edinburgh Festival Fringe this year with a brand new stand up show.

A show about life.

The way things were, are and really shouldn't be from Scotland's comedy dynamo as he rips through our modern lifestyle like Wiley Coyote on the scent of Roadrunner.

Paul Pirie began his stand-up career in 2006 quickly establishing himself on the Scottish comedy circuit. With a driving force for achievement Paul worked his way into the London clubs and was launched onto the UK comedy scene, emerging as one of the biggest Scottish acts on the UK comedy circuit. Paul's career has encompassed TV (appearing in Ikea's April 2011 comedy based TV advert), Film and Radio alongside his burgeoning skill as a stand-up.

His hilarity and comedic ability has earned him huge popularity with comedy goers and bookers across the world, gigging as far abroad as Australia and for diverse audiences such as The Armed Forces. He is a regular performer at The Glee, Komedia, Last Laugh, The Stand, Up the Creek, Jongleurs, The Comedy Cafe, Rawhide, Banana Cabaret, Bearcat, Baby Blue, and many more. Paul's work is superbly individual and put simply, delivers a refreshing burst of laugh out loud comedy that leaves audiences in raptures.