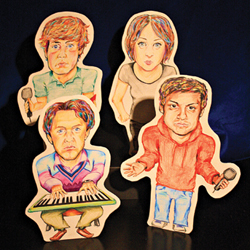 Four comedians: Fern Brady (So You Think You're Funny? and New Act of the Year finalist), Glenn Moore (Chortle Student Comedy Award runner-up and So You Think You're Funny? finalist), Manraj Bahra (Chortle Student Comedy Award semi-finalist) and Tom Taylor (Harrogate Comedy Festival Comedian of the Year finalist). Three perform each night. Guaranteed audience of one as we pool our multiple awards and new act finals in an effort to get one of us on Michael McIntyre's Comedy Roadshow.