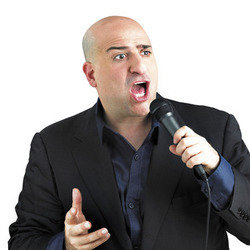 Strictly no latecomers. Under 16's must be accompanied by an adult.

Edinburgh Festival Fringe's legendary comedian, Omid Djalili, is back with a splash, for 13 performances only. Time Out Award - Best Stand Up, EMMA Award - Best Stand Up, South Bank Award nominee and Perrier Award nominee. Book early. 'Right now, the Iranian Djalili is probably one of the most subversive, let alone funniest, comedians around.' (Guardian). 'To carve yourself out a career as the thinking person's Iranian comedian in this political climate takes a fine brain and a masterful way with the audience. There is no question that Omid Djalili possesses both.' (Sunday Times).

He's back (with a splash!) - following on from a hugely successful run in the West-End, Omid has announced a thirteen nights of Omid Djalili Live at the Edinburgh Festival this year at The Assembly Rooms, Music Hall. Tickets are on sale now.

A firm favourite at the Edinburgh Festival with his legendary performances, Omid's stand-up awards include: 'Time Out Award' - for Best Stand Up, the 'EMMA Award' and was a 'South Bank Award' nominee as well as being a 'Perrier Award' nominee.

This year, Omid will also star in a new stage production of The Shawshank Redemption also at The Assembly Rooms, Music Hall daily throughout August. Omid will play the character of Red, who was played by Morgan Freeman in the 1994 film version.

British-born Iranian comic and actor Omid Djalili's legendary performances on stage and screen have won him plaudits the world over. Credits include 'Fagin' in West-End smash-hit Oliver!, 'Dr Rance' in Joe Orton's What The Butler Saw at The Vaudeville Theatre 2012 and 'Mahmud Nasir' in The Infidel. Most recently seen in Sex and the City 2 and Mr. Nice.