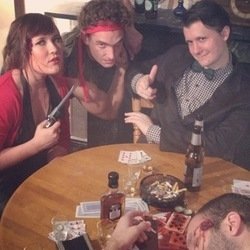 This Australian trio will hit you with a free comedy show that - whoa, their venue won best gelato in Edinburgh? Really? They did? Man, we need to get that gelato. Oh wait, the show? Okay look, if Zeus and Thor had a love child, it would be this show. If the universe ever stopped expanding, it would be for this show. If there was a reason for living, it would probably be this show. We don't know that for sure, it could be this gelato. It's some pretty good gelato.