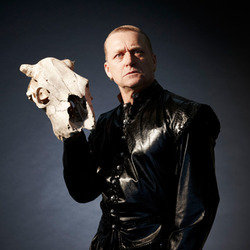 In the fetid bedsit of an actor's mind, a Glaswegian thug, a giant Jamaican and a hungry octogenarian battle for supremacy in one man's body: Hamlet's. From New Zealand, celebrated actor and director Michael Hurst (Hercules/Xena/Spartacus) brings you an adventure in the Shakespearean afterlife. Described as exhilarating, brilliant, deranged, hilarious and soulful, this comic tour de force is not to be missed. Hurst and co-writers Natalie Medlock and Daniel Musgrove have crafted an extraordinary piece of theatre featuring tights, schizophrenia and blank verse. 'Hurst is a master ... in complete control of his art' (City News).