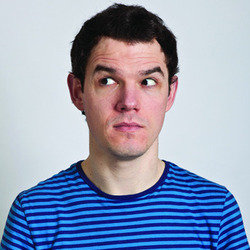 Faced with a dysfunctional childhood, Neil built an escape route into his imagination. A show about how comedy is the best way to deflect reality. Witness a life defying escape as the biographical becomes hilariously fantastical. Escape Artist is a highly distorted version of one man's life, a fast and funny every-man journey (also for women). 'One of the most exciting newcomers to the Irish scene' (Irish Independent).

Irish Comedian Neil Hickey makes his solo debut at the Edinburgh Fringe Festival this summer, with his new show Escape Artist. A fast and funny show about how comedy is always the best to deflect reality.

See Neil's thoughtful and richly imaginative brand of humour at the Pleasance 'That' from the 31st July - 26th August.

Within the year that followed Neil's first performance as a stand-up comedian he found himself on a journey that lead from delivering his well crafted jokes to audiences in Irelands most established comedy clubs to winning The Bulmers, Nuthin Butt Funny Newcomers Comedy Competition. An opening that had the knock on effect of Neil being offered the opportunity to make his Irish television debut appearing on RTE's highly rated Liffey Laugh Stand-Up Show while also affording Neil one of the highlights of his stand up career, the opportunity of support Bill Bailey at Dublin's famous Olympia Theatre. More high profile gigs followed including several performances at Irelands invite only festival the Kilkenny Comedy Festival and Irish Just for Laughs Montreal Showcase.

Never one to rush in where fools dare however, Neil took the time to go back to University College Dublin as a mature student to pursue a degree in English and Drama, a move he felt would scratch a great urge he had in him to improve as a writer. Although never straying far from the comedy clubs Neil hit the books and got the desired piece of paper. Now back on the comedy scene full-time for over a year, with a new vigour inspired by new found influences, Neil has never been more excited about doing what hehas always loved doing best. Confidence can only come with experience and it is in this spirit that Neil feels it is the right time to embark on his first solo Edinburgh Fringe Festival show.

Always one to prepare so far Neil has road tested Escape Artist in the 10 Days in Dublin Festival, The Blumers Galway Comedy Festival and also as part of the 2012 Brighton Fringe Festival.