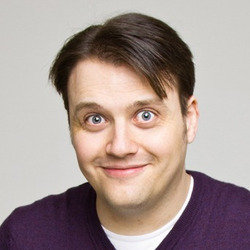 Having wasted his life indulging his minor obsessions Nathaniel attempts to justify them to you. Hackney Empire finalist's debut show. As heard on James Acaster's Findings (BBC Radio 4). 'Wonderfully quirky' (Time Out). 'Stuff of dreams' (List). 'There is a touch of the Stewart Lee about his delivery as he employs long pauses, and a great deal of repetition to emphasise his points, but it's Lee on ecstasy. A friendly, jovial enthusiastic fellow' (Chortle.co.uk). 'Brilliant, unusual and very funny' (Josie Long). 'Genuinely one of the best five comedy shows I have seen. Original and hilarious' (Josh Widdicombe).

In his debut Edinburgh show, Nathaniel explains how a long period of unemployment led to his fascination with old Disney movies, Through The Keyhole and Danny Dyer.

Nathaniel has been doing stand up since 2007, and after only five gigs he got through to the semi-finals of So You Think You're Funny? In 2010 he made it to the semi-final of the Laughing Horse New Act of the Year and the final of the Hackney Empire New Act of the Year. He is the only resident act at Josie's Long Lost Treasures of the Black Heart club. Nathaniel could recently be heard on James Acaster's Findings on Radio 4.