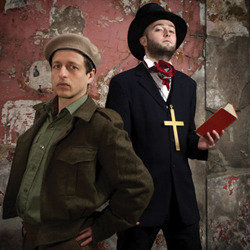 P45 Popes. Gun-toting Paralympians. Nick Clegg. We live in ethically uncertain times. Not to worry, though, critically acclaimed comic poets Gary From Leeds and Richard Purnell are here to settle your moral quandaries through the only means necessary: Moraletry. What, you may ask, is Moraletry? Like a cross between John Cleese, John Betjeman and Mother Teresa, Moraletry is a show which fuses comedy and poetry while tirelessly pursuing the moral high ground. 'A sharp script ... thoroughly entertaining' (SabotageReviews.com). 'Flow, bite and panache in equal measure' (Nottingham Post). 'Snappy, humorous yet seriously thoughtful' **** (BroadwayBaby.com).

Written and performed by Gary From Leeds and Richard Purnell.

Like a cross between John Cleese, John Betjeman and Mother Teresa, Moraletry is a show which fuses comedy and poetry while relentlessly pursuing the moral high ground.

Moraletry charts the rise of the moral poetry movement, also known as Moraletry, formed in early 2013 by Gary From Leeds and Richard Purnell. Gary is the visionary leader. Richard is his fellow poet and publicist.

They have designed the corporate structure. They have drawn loosely factual charts and graphs. But can they reverse the seemingly inexorable decline of morality in the UK?

Gary is Editor of the alternative writing magazine, The Alarmist: "Possibly the most irreverent new literary magazine I've seen" Dazed & Confused. "A distinct whiff of the different...a modern kind of modernism, and a lot of fun" Rough Trade.

Richard, meanwhile, is host of The Bus Driver's Prayer, a night of music, spoken word and buses in London's Brick Lane.