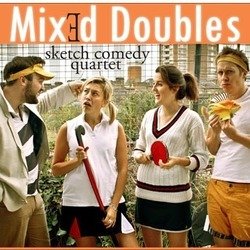 Since forming in 2012, Mixed Doubles have emerged as one of the most exciting comedy collectives on the British circuit. Fresh faced, quick witted, and brimming with light-hearted, good-natured energy, this is their debut at the Festival. In February, the gang scooped The Dave Comedy Festival People's Choice Award in the Comedy Short Competition, for their sketch Modern Conversation. It attracted twitter praise from the likes of Armando Iannucci, Sue Perkins and Clare Balding! Andy Murray wasn't quite so keen ... find out why when you come and join them! Double up!

Mixed Doubles got together in the tropical British summer of 2012 after four like-minded social pariahs decided to join forces in a collective snigger-fest. Known to each other from their drama school days at Mountview Academy, all four were keen writers and it was surely inevitable that they would one day reunite and postpone unemployment through the means of sketch comedy.

Their debut performance was a week of shows at the Henley Fringe Festival July 2012. The group had no idea what to expect, but the comic energy meant that audience reactions and press reviews were so positive that they committed to developing the show full time.

The foursome has a keen eye for the ludicrous, and they have enjoyed an impressive first year on the circuit. Now regulars on the London comedy scene, with 3 sell-out week-long runs, they have also played corporate gigs to huge crowds. The team also scooped the People's Choice Award at the Dave Comedy Festival for their comedy short, Modern Conversation. All of this, whilst having a darn good time!

The original four has grown to a team of seven. Director Hannah Joss came on board to sharpen the story-telling, shape and pace. Filmmaker Ben Garfield liked what he saw and arranged for a full crew to film some of MDs' best sketches for Internet release; which have since notched up over 20,000 views! Producer Rachel Metcalfe has adopted them alongside her day job at ITV, and is very excited to be joining for the whole run at the Edinburgh Fringe.

The Mixed Doubles' Edinburgh Fringe debut will include the best of their previous shows plus a few new sketches, as yet to be scribbled on the back of an iPad.

With glowing reviews and Twitter praise from the likes of Armando Iannucci and Sue Perkins, you would be mad to miss Mixed Doubles' debut at the Edinburgh Fringe. You can find them daily at Just The Tonic, Just up the Road at 6pm. Come and join forces with the MDs and spread the word. Double up!