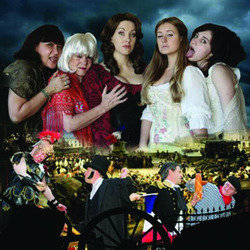 Anne Muffaway, Jean Jackman and Inspector Crowe the singing policeman are among the characters in this hilarious musical parody set in 19th-century France. Miserable Lesbians - based on, you guessed it - 'swept the board with eight awards at the annual Toscar awards in Hollywood' (BBC News). Already a YouTube sensation, Miserable Lesbians now comes to the stage in an expanded, outrageous version direct from New York.