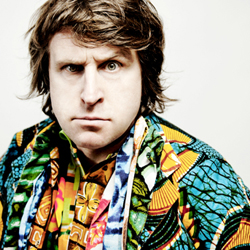 He brings his tour show On The Road to Edinburgh. If you like the stuff he's done on Mock the Week, Live at the Apollo or in any of the nine radio series he's done for Radio 4, then this is the show for you. Hundreds of his celebrated one-liners, plus pictures he drew. Clever, surreal but mainly just stupid, stupid, stupid. He's won awards you know. 'He's fast absurd, and very funny' (Radio Times). 'No-one can touch Jones when he hits his stride' (Guardian).