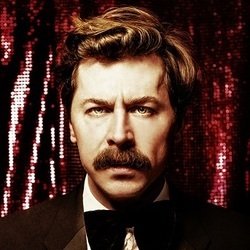 His wife's parents have moved in. Permanently. Not so much a show as a person getting out of the house. But fear not, Wozniak has more show business in his moustache than he does in his little finger. Where do you keep yours? Let's find out if we get around to it. 'Just could be the new comedy hero.' Time Out wrote that ages ago. 'Completely hilarious, highly recommended' (3 News - they are real and based in New Zealand). Wozniak has a total of 43 stars from an undisclosed number of reviews.

Soon to co-star in the upcoming Channel 4 sitcom, Man Down, Mike Wozniak makes his eagerly anticipated return to the Edinburgh Festival Fringe with his hilarious new show Take The Hit at The Stand 2 from the 1st - 25th August (not 12th.)

Mike has had a three-year hiatus from the Fringe and in that time his personal life has not gone according to Plan A. Most distressingly, his wife's parents have permanently moved into his tiny home. A home that wasn't quite big enough for him, his wife and his two year old daughter without two more people and their life time's collection of brick-abrack. For Mike, Take The Hit is not so much a show as a person getting out of the house. But fear not, Wozniak has more showbusiness in his moustache than he does in his little finger.

[/i]Take The Hit[/i] is an uplifting new hour of no frills, both barrels, beg-borrow-and-steal-fora- ticket stand-up. Personal, confessional, occasionally uncomfortable, this is a show for anyone and everyone, except Mike's mother-in-law.

Mike began his stand-up career in 2007, making his Edinburgh Festival debut in 2008 and earning himself an if.comedy Best Newcomer nomination in the process. Mike can also be seen frequently collaborating with comedian Henry Paker and filmmaker Ed Tracy, whose credits include Fonejacker and Facejacker.

In addition to his role alongside Greg Davies in Man Down, Mike has co-written and will star in BBC Radio 4's new sketch series, Small Scenes alongside Daniel Rigby, Henry Paker and Sara Pascoe. Other TV credits include It's Kevin (BBC Two), Richard Hammond's Secret Service (BBC One) Dawson Brothers' Funtime (BBC Three), Happy Finish (Channel 4) and Live at the Electric (BBC Three). Theatre credits include the lead role in Celebrity Night At Café Red by Lily Bevan at Trafalgar Studios, 2012. This August he will also co-star in the UK debut of Richard Dresser's Below The Belt at the Pleasance.

Mike has also written for television and radio shows including Stand Up For The Week, 8 Out of 10 Cats (both Channel 4) and The News Quiz (BBC Radio 4.)