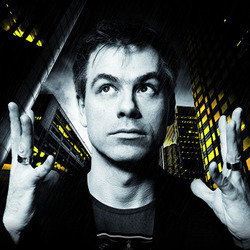 Following a hugely successful UK invasion in 2012 Germany's top comedian returns to the comedy frontline this year with a brand new show.

Das Blackout is an insider's guide to Earth's final frontier: the eerie yet fascinatingly dark landscape of the German soul - a mysterious place, were guilt, Schadenfreude and bratwurst reside. Along the way Michael will be also be journeying into the uncharted realms of Austrian nuclear intelligence, Swiss erotica and hijackers from outer space in his efforts to make the world realise that German funny bones should be an essential dish on every comedy connoisseur's menu.

So don't fear Das Blackout because in these dark times of European recession and Global strife Bavaria's comedy powerhouse has arrived to save the world from Universal political idiocy and narrow-minded thinking by electrifying Edinburgh's laughter lights.

Michael Mittermeier is a trail blazer of stand-up comedy in his native Germany winning a multitude of awards for his live sell out shows with DVD/CD sales reaching Gold and Platinum status in Germany, Switzerland and Austria. He has performed internationally in German and English in Switzerland, UK, US, South Africa and Canada, and supported U2 in Berlin.

Since his debut UK stand-up show, A German on Safari, at The Edinburgh Festival Fringe 2012 Michael has performed two successful seasons at London's iconic Soho Theatre and appeared at The Altitude Festival. He is also currently on the first leg of a two year tour of Germany.