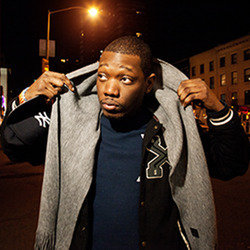 Critics and audiences agree NY-based comedian Michael Che is a star on the rise. Recently named one of Rolling Stone's 50 Funniest People, Che's humour applies street culture to world issues with a delivery that the New York Times describes as 'a reflective, laid-back stage presence with jokes that draw as much from his city upbringing ... as from blunt, insightful points that bring the abstract into focus'. In addition to writing for NBC's Saturday Night Live, he has appeared on CBS's Late Show with David Letterman and as a weekly contributor on VH1's Best Week Ever.

Critics and audiences agree, NY-based writer and stand-up comedian Michael Che is a star on the rise and a shooting star at that. This year he has already been named as one of Rolling Stone's 50 Funniest People in 2013.

Michael Che makes his Edinburgh Festival debut this year with his hour long show Michael Che - Cartoon Violence. His comedy uses humour to identify humanity in the most controversial actions. Whether it is a story about his friend "Homeless Dave," or tackling relationship issues and why "like" is better than "love": "People kill their loved ones all the time. Nobody ever kills people they like, though. Nobody's watching you sleep through your bedroom window because you're 'pretty cool.'" Che's act also digs deeper than the seemingly common topics he addresses by providing keen, yet jovial insight into larger issues like race relations, gay marriage and world hunger.

A native of lower Manhattan, Che applies street culture to world issues with a delivery that The New York Times describes as "a reflective, laid-back stage presence with jokes that draw as much from his city upbringing...as from blunt, insightful points that bring the abstract into focus."

In March this year, Che was brought on as a writer for two instalments of NBC's iconic Saturday Night Live. His romantic comedy parody She's Got a D!%k, starring that week's host Justin Timberlake, was a highlight of the March 9th episode. Che appears weekly on Vh1's Best Week Ever and was featured on John Oliver's New York Stand-Up Show on Comedy Central, Money from Strangers on MTV and as a recurring contestant on IFC's comedy game show Bunk. This year, he will be featured at The Melbourne International Comedy Festival, Comedy Central's South Beach Comedy Festival, The Moontower Comedy Festival, and Bonnaroo.

At the end of last year Che made his Late Night television debut performing stand-up on CBS's Late Show with David Letterman. Also in 2012, he created, wrote and starred in the original web series The Realest Candidate on Broadway Video's YouTube channel, The Above Average Network. Che was crowned the winner of the New York's Funniest Stand-Up competition at the 2012 New York Comedy Festival, and both Time-Out NY and Comedy Central have listed him as one of their "Comics To Watch." He headlines comedy clubs and colleges nationally and internationally.