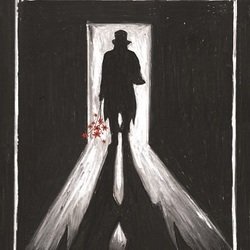 No Latecomers. Under 14's should be accompanied by an over 14 year old.

A small, polite choir gathers to sing some hymns and light opera, delighted with their last success, a hugely ambitious site specific South Pacific. Enter Melmoth, distraught, tormented soul, condemned to relive his terrible story for eternity. No matter how politely the choir tries to escape, their descent into hell is inevitable, terrifying and strangely hilarious. Trapped in a gothic nightmare with cannibalism, torture and sacrifice, the choir will never be the same again. Saw meets Fawlty Towers meets Flann O'Brien in this random playground of the bizarre with masks, squeaky toys and a Table of Death.