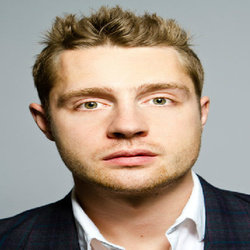 Isn't it lovely to receive a letter from a friend? This is the story of how a lonely second-hand bookshop owner accidentally became my pen-pal and changed my life. A touching and hilarious stand-up show from the guy who brought you the 2012 hit show, This Will Only Take a Moment. As seen on BBC2, as heard on his Sony Award-nominated Absolute Radio show, and star of Dregs. 'Momentous' **** (BroadwayBaby.com). 'He made the show' **** (Comedy.co.uk ). 'Razor sharp' ****(Festmag.co.uk). 'Buckets of energy' (Daily Telegraph).

Max Dickins is an award winning stand-up comedian, former Sony Award nominated radio presenter for Absolute Radio, and was named by The Sun newspaper as on of their "Comedy Picks" for 2011.

Dickins was part of the prestigious Edinburgh stand-up showcase The Lunchtime Club in 2011 and performed his debut solo show This Will Only Take A Moment at the Fringe in 2012. This year, Dickins will be performing in AAA in the Pleasance Courtyard, as well as performing his second solo show Dear Ray, which is the story of how a lonely second-hand bookshop owner accidentally became Dickins' pen-pal and changed his life.

Max Dickins is also part of the critically acclaimed double-act sketch group Dregs with comedian Mark Smith. Dickins and Smith wrote and appeared in sketches for Channel 4 (This Just In) and BBC2 (Dick and Dom's Funny Business) and took their debut Edinburgh show to the Fringe in 2011, which enjoyed a sell-out run at The Underbelly. Dregs' show was recommended by The Independent as one of the "Top Ten Comedy Shows To See At The Fringe" as well as receiving recommendations from The Guardian and TimeOut. The Dregs' fortnightly podcast was recently nominated for European Podcast of the Year.

Dickins is also part of a writing and performing partnership with comedian Amy Hoggart, snappily named 'Amy and Max'. The duo are renowned for their huge variety of distinctive and original characters, which feature in weekly improvised comedy sketched posted on their popular YouTube Channel

Here's the short promo for the show featuring Max and his director Jimmy Walters: