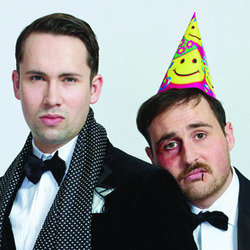 Max and Ivan - made up of Ivan Gonzalez and Max Olesker - debuted their unique brand of narrative sketch comedy in 2011, and have quickly established themselves as one of the finest sketch acts on the circuit. They have compered at the Hammersmith Apollo, appeared at festivals across the globe including the Melbourne International Comedy Festival, Latitude, Bestival and SXSW, and host the acclaimed monthly residency Max and Ivan's Roffle Club (Time Out Critics' Choice).

Their show at the Edinburgh Fringe 2011, Max and Ivan are...Holmes & Watson, was a sell-out hit, garnering five (and one six) star reviews, and transferred to the Soho Theatre for a sell-out run soon after.

Their follow-up show in 2012, Max and Ivan are...Con Artists, enjoyed a sell-out run at the Edinburgh Fringe and earned widespread critical acclaim. Directed by Jess Ransom (Horrible Histories, Armstrong & Miller), the show transferred to the West End where it enjoyed sell out runs at the Leicester Square Theatre and the Soho Theatre's Main Space. They also took the show to the 2013 Melbourne International Comedy Festival, where they were nominated for the prestigious Barry Award for Most Outstanding Show.

The duo's credits include Badults (BBC Three) and Sketchorama (BBC Radio 4), and they have written and starred in a series of sketches for BBC Comedy Online.

Max and Ivan also set up the most talked about event of the Edinburgh Fringe 2011, The Wrestling, which pitted comedians including Russell Kane, Adam Riches and Tom Rosenthal against each other in wrestling bouts in front of a sell-out 800 strong crowd. Despite Max breaking his ankle midway through the show, they went on to secure the Foster's Edinburgh Comedy Awards Panel Prize for the event. They are masterminding The Wrestling II, which will take place at the Pleasance Grand on 13 Aug and will again feature some of the biggest names in comedy.