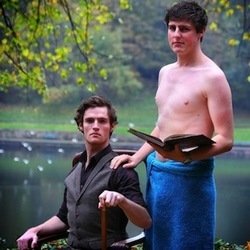 Improviser Matt Stevens and stand-up Glenn Moore have combined forces over the last 18 months to create a joke-heavy and frenetic sketch show. Thünderbards present an hour of tight sketches, witty characters and excessive puns, presented as a series of short stories from an old leather-bound book.

Glenn Moore was a 2012 Fosters So You Think You're Funny? finalist and the runner-up in the Chortle Student Comedy Competition 2011 as well a winner of King Gong at the Manchester Comedy Store. He also supported Josie Long on the Sheffield leg of her Alternative Reality Tour.

Matthew Stevens was the bronze medallist in his senior school sports day triple jump in 2007 and hasn't entered a competition since. He does, however, regularly perform on the London improv comedy circuit with the troupe Do Not Adjust Your Stage.

Thünderbards have entertained audiences across the country with their brand of storytelling humour, from a tea shop in Liverpool, to the cavernous 1000-seater Crucible Theatre in Sheffield as well as pubs, theatres and comedy clubs across London. They were selected as one of 12 acts to perform at the inaugural London Sketch Comedy Festival in May 2013.

Their Edinburgh show mixes stories with short scenes and one-liners to create a fluid narrative that builds in pace towards a frenetic finale. This is more than a joke-a-minute, expect to go no more than a few seconds without a gag.