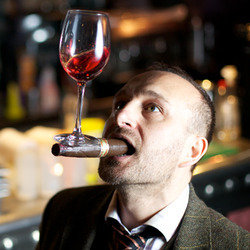 Winner of Best Speciality Act at the London Cabaret Awards, and as seen on the Jonathan Ross Show, 'the Derren Brown of juggling' (LoveFringe.com) brings a show packed full of big laughs, serious skills and breathtaking spectacle. ***** (Herald). ***** (FringeGuru.com). ***** (LoveFringe.com). 'It takes more than dexterity to bring this timeless art to the forefront. It takes dazzling showmanship, spot-on comic timing and bucket-loads of style. It takes Mat Ricardo!' (ER Magazine). 'Immensely skilled and very funny' (Time Out). 'Slick, sublime and eloquent' (Skinny).

In both his previous one-man shows (the five-star reviewed Vaudeville Schmuck and the Herald Angel Award-winning Three Balls and a New Suit) Mat told stories from a life spent touring the stages, streets and clubs of the world with his act. This year, "The Derren Brown of juggling" (LoveFringe) brings you the act.

Two and a half decades of work, practice, honing, polishing, brainstorming and attempting - if not the impossible - then certainly the bloody difficult, means that in a world where variety is seen as an embarrassing and unfashionable relic only suitable for talent shows, Mat Ricardo is at the forefront of the re-invention, and re-evaluation of his art form.

Showman is packed with tricks, with genuine displays of danger, of understated dexterous elegance, of thrills, skills, spectacle, slapstick and wit. He presents some old favourites and some signature routines, some tricks that haven't been performed for decades, and some that have never been performed before at all, oh, and one that killed a fellow juggler in 1936.

The leading speciality act of the British cabaret revival, winner of Best Speciality Act in the London Cabaret Awards, and the UK's most successful juggler, Mat Ricardo delivers a show packed full of big laughs, serious skills and breath-taking spectacle.