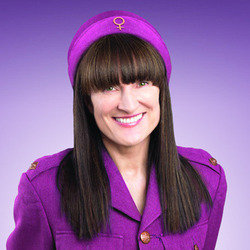 It's a show about feminism without all the boring preachy bits, plus it's very funny too. 'One of the best female acts on the circuit' (GQ). 'An hour packed with fine routines and beautifully written gags' (Scotsman). 'Bourke's obvious skill is such that the audience are never less than utterly delighted ... an accomplished and thoroughly enjoyable piece of work.' **** (Fest). 'A great show ... Bourke's comedy is savage in intent and surgical in execution ... Bourke goes in search of the original spirit of stand-up and reclaims it with style' ***** (Skinny).

Irish born writer and comedian Mary Bourke is an understated star - however this year her star is set to shine. Mary returns to Edinburgh festival with her brand new show Muffragette after last year's magnificent and critically acclaimed Hail Mary show. The show is a hugely funny take on feminism but without all the boring preachy bits!

Muffragette was written when Mary, 49, was seriously disturbed after discovering an alarming rise of misogyny on the comedy circuit with its avalanche of "rape and peado jokes". She was concerned with the fact that many younger women felt that feminism is just not that relevant to their lives anymore. Why would they not embrace something that was clearly the greatest thing ever?

Mary will come armed with her feminist manifesto to Edinburgh this year because she wants to try and make the world a better, more equal, place not just for women but for everyone. By the end of the show maybe you'll call yourself a "muffragette" or maybe you won't but at the very least she hopes that you think about feminism and yourself and that you'll wear your "THIS IS WHAT A MUFFRAGETTE LOOKS LIKE " badge with pride!

As well as being an accomplished comedian Mary has performed all over the world winning over the audiences where ever she goes.