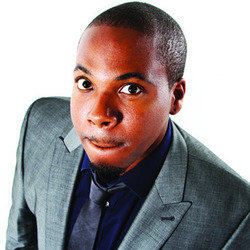 Marlon Davis returns to Edinburgh for a second year with a brand new hour of soul-baring comedy in Crackin' Up. Marlon will be playing to audiences daily from 31st July - 25th August at the Pleasance This at 7:15pm.

Crackin' Up follows a man's obsession with childish things and a woman wanting more out of that relationship. They reach breaking point when a decision is made. He loses both things and tries to win them back. Marlon lives in a virtual world where everything is perfect. However, in reality his life is turning to shit. Due to his obsession with Football Manager.

Davis is quickly climbing the comedy ladder and regarded as one of the hottest new names on the circuit. His refreshing observations has seen Marlon named as FHM Stand Up Hero 2009 winner, So You Think You're Funny 2006 finalist, Laughing Horse 2006 finalist and Amused Moose Laugh Off 2006 semi finalist.

Alongside his stand-up talents, this bright young comedian is also a respected actor and writer. With a Brown Eyed Boy series on MTV under his belt he also featured in and wrote for the series, Secret Life of Hoodies (Paramount).