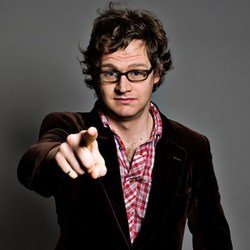 TV's Mark Dolan is back with his hilarious new stand-up show for 2013. Mark's glass is half full, as he celebrates the awesome things in life, like finding money in old trousers, dogs leaning out of car windows, and discovering that your mental girlfriend isn't pregnant. The show features hilarious video clips and a prize for each audience's most awesome person. Don't miss! 'So funny, a master of improvisation and audience interaction' **** (Fest). 'Consistently Funny' (Independent). 'The audience are left gasping for breath, such is the laughter in the room' (Sunday Express).

Mark Dolan is back with his hilarious new stand-up show for 2013, ingeniously titled Mark Dolan: You're Awesome! The star of Channel 4's Balls of Steel and the World's ...and Me documentary series has made a decision to keep his glass firmly half full, as he celebrates the awesome things in life, like finding money in old trousers, seeing dogs leaning out of car windows and discovering that your mental girlfriend isn't pregnant.

In this joyful, celebratory and above all hysterically funny hour of stand-up comedy, the show features hilarious video clips of Mark's nationwide search for Britain's Most Awesome Person and the awarding of a suitably glittering prize to the most awesome person found in Mark's audience every night of the Fringe.

Active on the stand-up circuit, Mark is the resident MC of Soho's legendary Amused Moose comedy club. He also had a successful run of his Edinburgh Festival one man show, I'm Here to Help! in 2007, in which he helped solve the audience's problems. He returned in 2011 with his critically acclaimed first solo show Sharing Too Much. He also headlined shows at the 2011 and 2012 Udderbelly Festival on the South Bank.

Mark was also the presenter of all three series of the seminal Channel 4 hit comedy show Balls of Steel, which currently airs nightly on 4 Music. After Balls of Steel, he dived into the murky world of advertising, presenting Channel 4's Mad Bad Ad Show, alongside Micky Flanagan and Mark Watson. This year Mark also appeared most gracefully as a dancer on Let Dance For Comic Relief alongside BBC 6music breakfast host Shaun Keaveny and fellow comic Hal Cruttenden.

As a broadcaster, Mark launched both E4 and More 4 respectively as host of both the comedy show Show Me The Funny on E4, and The Last Word, the topical late night talk show, on More 4. His breakthrough in 2000 came as star of The Richard Taylor Interviews, the hidden camera job interview show for Channel 4. In the same year, Mark reached the final of the Channel 4 live stand-up competition So You Think You're Funny.