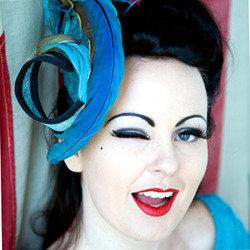 One of the most successful variety shows of 2012. This year promises bigger names, bigger songs and even more sparkle. A late night date with Lili and her glittering cavalcade of Cabarati. Regular performers include comedy genius The Boy With Tape On His Face, the outstanding Mat Ricardo (as seen on Jonathan Ross) and many more. 'The voice of Vera Lynn and the figure of Jessica Rabbit' (Telegraph). 'A joy to witness ... captivating and heavenly performer - the looks of a star and the voice of an angel' ****(Spotlight.com).

After bringing one of the most successful variety shows of 2012 to the Fringe last year, there was only one complaint from the press - "we want more of Lili"

And so this year Lili has selected her very favourite cabaret songs to beguile her audience as she wraps them around her little finger and prepares them to meet each new turn.

Another F*cking Variety Show is a late night date with Lili and her glittering cavalcade of Cabarati. But the focus remains fixed on the lady herself with her stunning voice and movie star looks all wrapped up in couture costumes bedecked with sparkle.

Lili has sought far and wide for guests to join in with the fun in this return to traditional variety - and the show promises big names, bigger songs and even more sparkle.

Regular performers the comedy genius The Boy With Tape On His Face, the outstanding master of table-top trickery Mat Ricardo (as seen on Jonathan Ross) will appear alongside Lili's pics of the best of the Fringe.

There's something on the bill for everyone; comedy, magic, burlesque, music and more, not forgetting, of course, conversation and songs galore from the lady who might just be the most glamorous thing at the Fringe - the 24/7 glamourpuss that is Lili La Scala.

Lili la Scala is one of cabaret's most in demand artists, able to whip the audience into a frenzy with her delicious blend of diva antics, big notes and stunning costumes. She'll have you eating out of the palm of her beautifully manicured hand with one skip of her sparkly heels.

So come on in, drink your little hearts out and giggle along. Do you want to enjoy Another F*cking Variety Show? Say "Yes, Lili!"

You'll love her... she knew you would.