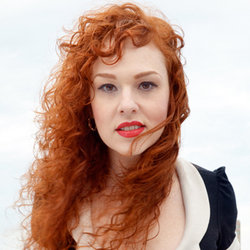 Life is shit. Drugs, shrinks, denial and the higher power of eBay haven't helped. It took Laura three hours to get a new diagnosis - judge her in 60 minutes. 'A straight-talking New Yorker with an upfront attitude' (Scotsman). 'Levites is both lovable and crazy' **** (BroadwayBaby.com). If life were a cab it would first refuse to take her home and then hit her ... wait ... it just did! Laura almost let a creepy ex-neighbour photograph her in chains for this show. 'Nuff said. Her dog needs vaginal rejuvenation. Lord knows what Laura needs. #SheTinklesWhenSheStands #TheDogNotLaura

Laura drags herself back to Edinburgh with her new show Selfhelpless. The only baggage she's brought is emotional. She can't afford anything else. Laura was looking for happiness and some nice shoes. Shoes she got, happiness had other plans. Laura has spent the last year in a tailspin. People refer to hitting rock bottom, but Laura keeps descending. How do you get yourself out of black hole? Yes, we all know that Americans love miracle cures, but who wouldn't? Pills, prescriptions, punks, disorder descriptions, second hand Dr. Martens and top rated doctors, she is trying them all on. Laura humorously takes you on her journey as she tries to figure out, if the pursuit of anything really is possible. An Ode to Joylessness.

Laura Levites is a professional stand-up comedian from New York City. Her last show American Girlfriend received numerous 4 and 5 star reviews, and has lead to a book of the same name. She has toured with Lisa Lampanelli, and was featured in Comedy Central's television show Meet the Creeps. Laura doesn't tell jokes. Her life is the joke. Laura's performances are brutally honest, biting and real. She embodies what great stand up should be: she's capricious, clever and socially relevant.