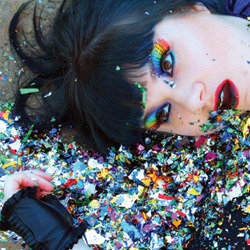 What gives you a Ladyboner? Or Man-Ladyboner? Australia's favourite weirdo sparklepuppy Lisa-Skye talks pleasure, sublime to creepy. Mostly creepy - Jesus, don't bring the children. A glittery drag queen trapped inside a goth girl's body. A metronome. Stories. This is not a drill. Get terrified and hard. Cult comedy for discerning short attention spans. 'Amazing' (Pun) 'Extremely funny ... a striking and original voice in comedy' (AustralianStage.com.au) 'Lisa-Skye will have you in stitches ... Ladyboner is not to be missed' (WeekendNotes.com.au). 'A dynamo on stage' (Crikey.com.au). 'Wickedly funny walk on the wild side' **** (Herald Sun).

In her hit show Ladyboner, Lisa-Skye discusses sexual pleasure in all its forms. Case-studies fetched from the grimy fringes of the sex industry and from the world of animal attraction include kinky butchers, her evil Greek grandmother and... Prince. There's a lot to cover.

Part drag queen, part Goth, part golden retriever on too much caffeine, Lisa-Skye aims to scare and excite. Her mix of jokes, stories, a metronome and a winning smile have seen Melbourne audiences fall in love with her (to their terror and delight) since she started performing in festivals in 2007.

Ladyboner is Lisa-Skye's third solo show. This and her most recent solo effort, Songs My Parents Taught Me, enjoyed sold-out seasons and rave reviews. A favourite with audiences and critics alike at Melbourne Fringes and Comedy Festivals, she now gears up to swallow Scotland whole, and invites you to come along and enjoy the madness.