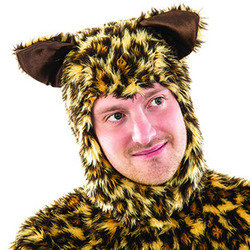 A man from Lancaster in a homemade leopard suit performs songs about Vimto, trains, service stations and the seaside. Returning to the Fringe for the second time and bringing along his friend Mr Ferris he presents a show full of stories, interesting instruments and trinkets. For fans of Flight of the Conchords and John Shuttleworth. 'Dead good' (NME). 'A great disappointment' (his Gran).