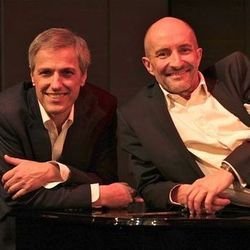 After sell-out shows in London's hottest cabaret venues, Kit Hesketh-Harvey and James McConnel return to the Fringe with their unique brand of sophisticated up to the minute humour. 'The wit, the elan and the musicality are still intact: James McConnel shines' (ThreeWeeks). With new songs, new hair, new shoes (by Primark), not to mention free parking, 'The duo make beautiful musical comedy together, catch this splendid show' (Evening Standard).

After sell-out shows in the hottest cabaret venues and major theatres in London and across the UK including the Pheasantry, Crazy Coqs, Salisbury Playhouse, Windsor Theatre Royal and the Royal Albert Hall (with Joan Rivers) as well as the Three Choirs Festival, Kit & McConnel return to the Fringe with their unique brand of sophisticated, up-to-the-minute humour with new songs, new hair, new shoes (by Primark), not to mention free parking.

In his previous life Kit Hesketh-Harvey preformed as one half of the much loved and celebrated 'Kit and the Widow', a two-man musical satire for which he wrote the songs.

Kit and the Widow were thrice nominated in the West End for Olivier Awards. They had their own series on BBC Radio 3 and Radio 4, and two specials on Channel 4 TV, They were frequently seen on the West End and international circuits as paid escorts to Joan Rivers and in 2011, they co-starred at the Royal Albert Hall in the first ever BBC Comedy Prom: their final appearance on stage together.

James McConnel first began working with Kit when collaborating on an adaptation of the Virginia Woolf novel, Orlando, for the musical stage. This won the 1988 Vivian Ellis Prize for young theatrical writers and was subsequently produced at the Barbican and Bridewell Theatres.

Their second musical, Yusupov, the story of the man who killed Rasputin, was premiered at Andrew Lloyd-Webber's 1994 Sydmonton Festival, with further productions at the Old Fire Station (Oxford) and Bridewell theatres. In 2000 they wrote New Edna in collaboration with Barry Humphries, starring Dame Edna Everage, which, after a National Tour, settled in at the Theatre Royal Haymarket in London.

James has written the scores for over 150 television documentaries and dramas, including the Emmy Award winning Ten Days To D-Day, as well as two feature films: Another Life (starring Ioan Gruffudd and Tom Wilkinson) and Detention (starring David Carradine in his final role).

Now Kit & McConnel bring you some of the classiest satire on the Fringe, as audiences enjoy just over an hour of old school cabaret. They will be loved by fans and people new to the duo alike.