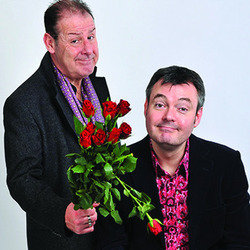 Two men of a certain age form an unlikely friendship through a shared love of Shirley Bassey. Together they begin a hilarious search for the women of their dreams. Acclaimed Scottish actors Andy Gray and Grant Stott star as Ross and Graham ... and all the women in their lives. A new play by Philip Meeks, writer of last year's sell-out Fringe hit Murder, Marple and Me.

Acclaimed Scottish actors Andy Gray and Grant Stott star in Kiss Me Honey, Honey!, a brand new play written by Philip Meeks, directed by Sam Kane and especially commissioned by Gilded Balloon Atrtistic Director Karen Koren. The play runs for the entire festival (except 12 August) at 18.45 in the Dining Room at the Gilded Balloon.

Two middle aged blokes form an unlikely friendship through a shared memory of the music of Shirley Bassey. After their lives have fallen apart they begin a search together, for the women of their dreams. What follows is an hilariously honest look at a pair of shambolic lives, what it means to be a Dad and a Son and how it feels to hit a certain age and not be where you expected you'd be in life.

Adored by Edinburgh audiences for their sell out season in the Kings Theatres legendary pantomimes Andy Gray and Grant Stott star as Ross and Graham ... and all the women in their lives. The show will be startlingly fast paced, with a rich seam of darkness running through the frenetically funny proceedings.

Sam Kane is well known for his television work which includes the role of Peter Phelan in Brookside. He's toured nationally as the leading man in many musicals including Carousel, Seven Brides for Seven Brothers, and Hot Flush. He is also a pantomime stalwart and he has directed the pantomimes he's appeared in with his wife Linda Lusardi for the past fifteen years.

Playwright Phillip Meek wrote the 2012 Gilded Balloon hit Murder, Marple and Me and Twinkle Little Star which appeared at the Edinburgh Festival starring Tim Healy in 2006. He also makes up the quartet of pantomime practioners working on the play! As well as writing countless pantomimes each season he also appears as Dame, currently at the Darlington Civic.