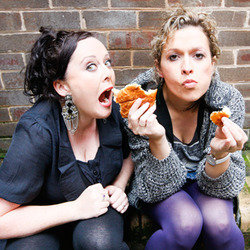 This twisted musical comedy duo (Sydney Morning Herald's 2012 Top Ten Rising Comedians) bring their hilariously questionable taste to Edinburgh. Kel and Fi's infectious songs and irreverent sketches will delight the most impure of minds. 'A naughty match made in comedy heaven' **** (Time Out). 'The voice of angels and minds full of schoolgirl mischief. What's not to love?' (Herald Sun). 'I never thought the girl I met 20 years ago, dressed as a field mouse in an amateur production of Wind in the Willows would end up being my friend and comedy partner' (KelFi & FiKel).

KelFi & FiKel are Fiona Della Ca and Kellie Higgins, a quirky two-woman comedy duo from Australia who will delight the most impure of minds. Fi and Kel have been best friends since they were eight years old when they met during an amateur production of Wind in the Willows. They started writing comedy together in 2007 and the result is an intimate, slick comedy spectacular that won them a place on Sydney Morning Herald's Top Ten Rising Comedians in 2012.

With Higgins at the piano, their beautiful voices wonderfully complement each other, so they are easy on the ear, despite whatever profanities or obscenities might be coming out of their mouths.

If you enjoy warped characters in off-the-wall scenarios, intimate musical comedy, with more one-liners than you can poke a stick at, come and check out the uniquely twisted perspective of KelFi & FiKel.