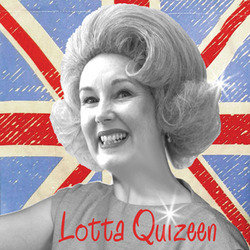 Ever wondered how to make the perfect dessert, create the consummate canapé and become a master of fitted sheet-folding?! With years of hands-on experience, Mrs Lotta Quizeen uses the rituals, responsibilities and realities of domesticity (traditionally dismissed as women's work) to entertain, educate and amuse you. A rich but easily digested diet of non gender-specific domestic tips and practical advice for the 21st century. Think Fanny Cradock crossed with Nigella Lawson and a bit of Mrs Thatcher thrown into the mix!

Performer Katie Richardson aka Lotta Quizeen brings you Shelf Life - Lotta Quizeen's Guide to Managing the Modern Home, a 50-minute participatory performance (for both men and women) and continues Katie's exploration of women's work/woman's lot. Try your hand at canapé-creation, fitted sheet-folding and dessert-making while learning new tricks (whether you're an old dog or not). Immerse yourself in the glorious world of trusty domestic tips and essential entertaining and culinary advice.

This new work is a one-woman show, written, directed and performed by Katie Richardson. Through Lotta Quizeen, Katie is eager to discover whether 50 years of domesticity have indeed altered the status quo. Her inspirations take many forms: the work of artists Bobby Baker and Martha Rosler, the delicious Eurovision and its song contest, notions of competitiveness, topical issues in politics, culture and sport and of course, popular TV/internet lifestyle and cookery icons, in particular, Martha Stewart, Nigella Lawson and the (almost) inimitable Fanny Cradock.

Katie Richardson trained at the Central School of Speech and Drama (a very long time ago) as a stage manager. She then followed her diplomat husband around the world, acting in, directing and producing an array of (largely scripted) work. She returned to Central in 2008 for the BA in Applied Theatre (her dissertation examined the performance of domesticity) and completed her Masters in Performance in Brighton last year creating Lotta Quizeen and her work Domestic Bits (from which this show has evolved).