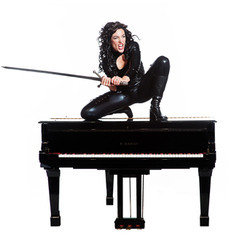 All guns blazing, no holds barred US comedian Katie Goodman descends on Edinburgh this August with a gutsy hour of raw humour and original satire. An internationally touring musical comedienne, Goodman is known for providing an audience with an act that is political, personal, provocative and packed with punch.

As the headliner, co-writer, and co-director (with husband Soren Kisiel) of the internationally touring show Broad Comedy, Katie was critically praised at the Edinburgh Fringe in 2010, being named a "Top-Ten Sketch Comedy Pick" (FringeReview), at the Vancouver Fringe Festival (Pick of the Fringe), and received extraordinary critical acclaim in Los Angeles and Boston during the show's extended 3-month runs in those cities.

She now returns to Edinburgh in her solo-show which has impressed audiences and critics alike wherever she performs.

Katie has performed nationally and internationally and has strutted her stuff and belted her songs at Caroline's On Broadway (America's number one Comedy Club in Times Square), on Current TV and on Showtime's comedy roundtable series, The Green Room With Paul Provenza. Her solo-show of political and personal satire is currently featured at the infamous Joe's Pub at The Public Theatre in NYC. She is a blogger for The Huffington Post, and has contributed to O, The Oprah Magazine. She is the author of Improvisation For The Spirit: Live A Creative, Spontaneous, and Courageous Life Using the Tools of Improv Comedy. Katie and her co-author/co-director husband Soren Kisiel were nominated for the MacArthur Foundation "Genius Grant" for work in theatre.