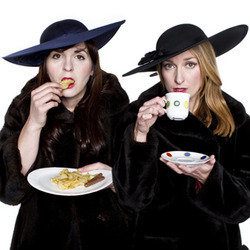 Critically acclaimed duo return with a brand new hour of sketch, character and musical comedy plus a lesson in how to be remembered fondly after you're gone. As heard on Radio 4's Sketchorama; as seen on BBC3's Feed My Funny and Channel 4's Comedy Blaps. Funny Women finalists 2012. 'A sublime female duo to embrace' ***** (BroadwayBaby.com). **** (Skinny), **** (FringeGuru.com). 'Look out for their future success' (Sunday Times).

Critically acclaimed duo That Pair return to the Just The Tonic Caves at The Edinburgh Fringe Festival from the 1 - 23 August with their brand new show, Never Liked Her Anyway.

After a celebrated debut in 2012, they are set to storm the Festival with their hilarious fresh hour of sketch, character and musical comedy plus, a lesson in how to be remembered fondly after you're gone. Watch as they perform with boundless amounts of energy, seamlessly transitioning between brilliantly written sketches and delightful musical numbers.

That Pair are Kathryn Bond and Lorna Shaw, who met at Bretton Hall where they discovered their mutual love of being from Essex. After they each graduated with a First Class degree in Theatre Acting both have been working as professional actresses. After returning from Clown school at the Actor's Space in Barcelona in 2010, they felt ready to come out of the comedy closet and have been performing sketch and musical comedy together ever since.

Lorna appeared in the award winning online series Dwain Chambers: Life Guru written by Ed Eales-White, John Pointing and Louis Fonesca. While Kathryn formed part of the small ensemble cast for the pilot of the new BBC Comedy show fronted by Kerry Howard (Him & Her) as well as appearing in Foster's Edinburgh Comedy Award winner, Doctor Brown's Channel 4 pilot. As a duo, they featured on BBC Radio 4's Sketchorama and performed alongside Russell Kane at the Bloomsbury Theatre.