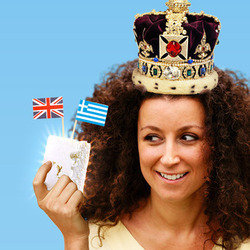 A show about Katerina's experiences as a Greek in the UK. It's about her identity, her love of stereotypes and how others perceive both. It's about queues, complaining and the weather. And dairy products and shouting. And delusions of grandeur - British ones, Greek ones and Katerina's. 'Katerina Vrana sparkles' (Time Out). 'Fizzles with verve and confident likeability' (Chortle.co.uk). 'Anyone who hasn't seen her, rectify the situation with considerable urgency' (DIVA Magazine).