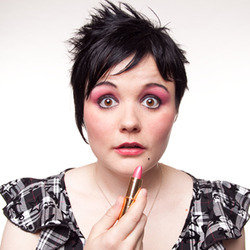 The Hot Box is where you look hot. The little window between being a total slob, and being all dressed up with nowhere to go. Everyone has one. This show is about that. Karin Danger has performed funny songs around Melbourne, Australia and the world for eight years. She's won a stack of awards for music and comedy. She's pretty hot and she has a box, for those reasons she's qualified to perform this show. Hot Box is jam packed with world-class original comedy songs. Directed by Scott Gooding (he doesn't have a box).