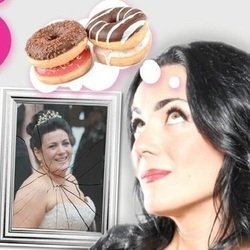 From severely obese to a size 10, Julia Sutherland tells her poignant, comic tale of life in two different bodies. After shedding six stone, her unique perspective offers real insight into the value we place on appearance, and how it affects our self image. Laugh-out-loud funny, authentic and inspiring - her story will make you think about how you treat others, and yourself. 'A brutally honest account ... Sutherland is sardonic and frequently very funny ... her experience of "before" and "after" a complete image change is a boon for an astute outsider-observer like herself' (Scotsman).

Have you ever imagined how different life could be, if you looked completely different?

Thought that if only you were thinner, you'd be happy, and your life would be perfect?

4 years ago she weighed in at over 16 stone - severely obese for her height. Despite being married and having a new baby, her size cast an unhappy shadow over her life - and one grey Saturday morning, she finally forced herself along to a local weight loss class to try and do something about it.

No one was more surprised than she was when... it worked!

18 months later, and 6 stone lighter, Julia had the body she always wanted (bar a few wobbly bits!) but hadn't ever dare dream of, and was on a hotpant high!

But before long, she started to see a side of the world she hadn't expected, and consequences of her transformation which knocked her sideways. So much of your identity is - sometimes subconsciously - wrapped up in your body image, and when that changes you lose yourself for a while... just as the world starts to treat you very differently too.

"A brutally honest account ... Sutherland is sardonic and frequently very funny ... her experience of 'before' and 'after' a complete image change is a boon for an astute outsider observer like herself" - The Scotsman

Despite the downside, the resulting boost in confidence gave Julia the balls to quit her job as a BBC producer/presenter of over a decade. She now performs stand-up all over the country, is part of a sketch group recently showcased on Radio 4's Sketchorama, presented TV features for The Hour on STV, hosted a new comedy panel show - The Good The Bad and The Unexpected for BBC Radio Scotland, and was most recently on BBC Scotland alongside Rory Bremner, on Rory Goes To Holyrood.

Fat Chance had its debut at the Glasgow International Comedy Festival, in March 2013, in the very room in Ibrox Library where Julia's journey began at those weight loss meetings - in the very spot where she stood on the scales every week! It was an unusual setting for comedy, but it completed the circle, and was an opportunity for Julia to tell her story to the people who would understand it the most.