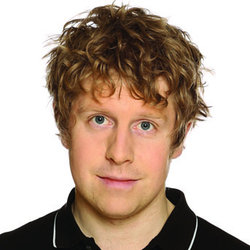 Star of Channel 4's The Last Leg, Live at the Apollo, 8 Out of 10 Cats, Mock the Week and Foster's Comedy Award Best Newcomer nominee Josh Widdicombe returns to Edinburgh with an all-new show for a limited run. 'This is one of the most individual, accomplished, hilarious and unforgettable hours I have had this year' **** (Scotsman). 'His gift for comedy is priceless' (Evening Standard).

Star of Channel 4's The Last Leg, Stand Up for the Week and BBC One's Live At The Apollo, Josh Widdicombe returns to Edinburgh with Incidentally... a brand new show for a limited two week run only (31st July - 15th August).

Josh is regarded as one of the best up-and-coming acts on the UK circuit. After fast establishing himself on the live circuit supporting huge comic talent such as Stephen Merchant, Kevin Bridges, Michael McIntyre and Alan Carr, Josh went onto have a sold out run at Edinburgh Festival in 2012 and a sell-out autumn tour.

Josh will return to Channel 4 this summer for a second series of The Last Leg alongside Adam Hills and Alex Brooker. Josh also continues to host his very own weekend radio show on XFM between 10 and 1pm on Saturdays.

Josh will also be filming his debut DVD Greatest Hits So Far... at the Hammersmith Apollo on 26th September. The DVD will be released by Universal Pictures (UK) in November 2013 **tickets available now!**