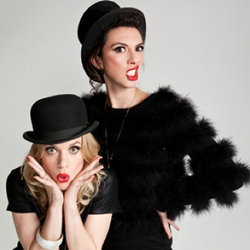 The stars of BBC Radio 4's Sketchorama return with another 'sassy and inventive tour-de-force of a comedy show' **** (List). 'Hilarious ... the most fun way to kick off an afternoon at the Fringe' **** (BroadwayBaby.com). 'You won't have time to draw breath between belly laughs' **** (Scotsgay.co.uk). 'The hour flew by. I was quite simply left wanting more' **** (ThreeWeeks).

Shirley and Shirley return to the Edinburgh Fringe Festival for a fifth consecutive year with their new show Carnage, at the Underbelly Clover from the 31st July - 26th August as they once again deliver a 'mash-up' of character sketch and physical comedy.

Watch as they filter our world through fabulously twisted minds to bring a hilarious mix of new characters alongside some old favourites, in this brand new hour. Will Obamisha and Fe Nay Nay be the next girl band to take the nation by storm? And will Pippa Middleton's big ole batty vex sister Kate once again? From chalk and cheese lovers, to bickering Italian gay brothers, this is one high energy way to kick start your afternoon at the fringe.

Shirley and Shirley are writer/performers Joanna Carolan and Pascale Wilson, and writer/director Michael Pearce. They first performed together in 2008 and have since appeared at the Edinburgh Fringe Festival for four consecutive years and numerous other comedy festivals including Latitude, Leicester and Glasgow. Credits include BBC Radio 4's Sketchorama (2013), filming sketches for Hat Trick Production's youtube channel Bad Teeth (2013), and five sketches for BBC online (2009). They are currently developing a TV sketch show.