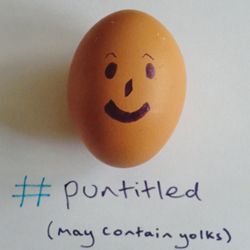 How about a novel concept? A comedy show with no personal revelation. This one just has jokes. Lots of them. 'Clever and friendly, engaging and intelligent, like having a drink with your weird pun-loving uncle' (Skinny). Use #puntitled on Twitter in the months before the show to suggest topics for jokes. During the show, use #puntitled to tweet your followers your favourite joke from the show, and their responses will be used as part of the show. www.freefestival.co.uk, #puntitled