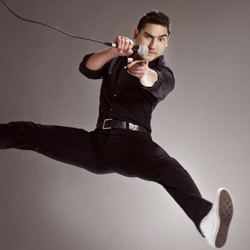 How many jokes are out there and you've just never noticed them? Humour that blends seamlessly into its surroundings? Comedy that waits silently in the shadows? Having dedicated years of his life to learning the deadly comedic arts, award-winning New Zealand comedian Javier Jarquin sets out to find, expose and present these rogue jokes to his audience in all their hilarious glory. Armed with slick observations and killer punchlines, Jarquin fights his way through an hour of stand-up. Expect blood.