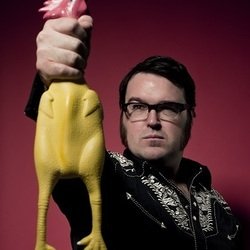 Ever wondered if you had what it takes to be a survivor? Can you make tough decisions? Do you know how to make a fire out of a broken chair and some hope? Jarred Christmas and Tom Davis host a game show like no other as we find out if you're going to be useful or just a bloody liability. It's glitzy, it's glamorous, it's the end of the world as you know it and there are prizes!

An in-depth, but, let's be honest, entirely superficial look at what it takes to lead a band of survivors. If you like comedy and you want to survive the end of the world then this is the show for you.

(DISCLAIMER: If you want genuine apocalypse and survivor based information then you should probably look elsewhere...)

However, if it's laughs you're after, then look no further as Tom Davis and Jarred Christmas bring you a game show that is off the chain! Morals will be tested, friendships strained and knowledge slammed.

Two comedians at the height of their prowess, (well, almost) bring you an hour of pure hilarity where no holds are barred, and there's no holding back. Survival, jokes, and more importantly, PRIZES are the name of the game!

Be in to win, be in to laugh and be in to stay alive. We're into surviving, are you?