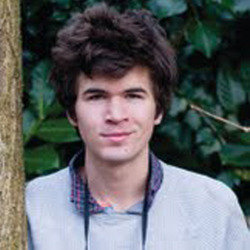 Binoculars is the punchline of a joke my brother made at my expense at Christmas. Please come and laugh my pain away. Hotly-anticipated debut show from So You Think You're Funny? winner, Leicester Mercury Comedian of the Year nominee, Chortle Best Newcomer nominee and 'one of the best young comedians around' (Time Out). 'Remarkable intelligence and maturity' **** (ThreeWeeks).

The So You Think You're Funny? 2009 New Act award winner, Chortle Best Newcomer nominee, and Leicester Mercury Comedian of the Year nominee is 22 years old and has been performing stand-up comedy for four years, at locations as diverse as the Hollywood Fringe, the Montreal Just For Laughs festival, and the Bognor Regis Yacht Club. But nothing he has ever said has been nearly as funny as when his younger brother said the word 'binoculars' at Christmas dinner last year. It seemed only fair that this should be the title of the show.

Ivo combines insightful stories of adolescence with a sharp witted presence that has rapidly gained him the acclaim of his audience, fellow artists and the critics alike.

Fifty-five minutes of rambling anecdotes about sibling rivalry, historical board games and the rising price of rice pudding in south London.