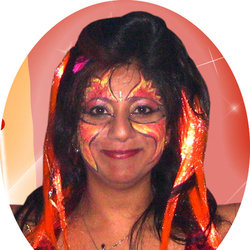 'Hotter than a hot madras!' (Laffacino's, Birmingham Comedy Festival) Join laughter coach, Ishi Khan-Jackson in spreading hilarity in her energetic, debuting one woman comedy cabaret about the secrets to happiness. She reveals her rich cultural heritage, how to dance like a Zambian and the daring outfit she wore on her first catwalk show! Open your hearts, lift up your souls and enjoy being happy! 'You come out of Ishi's show feeling uplifted, if not wanting to get up on stage and join her in dancing!' (Nottingham Comedy Festival, 2011)

For a colourful treat of comedy, Ishi Khan Jackson invites you to her highly-rated, debut show about the secrets to happiness - I am Happy!

The One-Woman Comedy Cabaret reveals her rich cultural heritage, including how to dance like a Zambian and the extremely daring outfit she wore on her first catwalk show! The show is all inclusive, uniting diverse audiences with something for everyone!!! Fairies, elves and Na'vi people are especially welcome!!

I Am Happy! has been nominated for Funny Women's Best Show Award 2013 and is currently touring the UK. Receiving rave reviews for some of her early work, Ishi Khan-Jackson has taken the big-step of building a full-length show which has been wowing the crowds.

Ishi says: "Freedom is one of the things I love about the UK and this happy show is a celebration of this! So open your hearts, lift up your souls and join in the magical spreading of fun, laughter and hilarity!"

Ishi will be appearing in Edinburgh on Friday 16 and Sunday 18 August 2013 as part of The Funny Women pop up fringe at Le Monde.