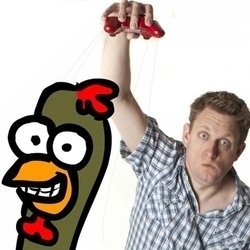 He was the first to use animation in live comedy, the first to make a cartoon boy belch in front of the Queen. Now multi award-winning stand-up animator Howard Read says he can perform stand-up as a cartoon character, live. Animated characters on stage, telling jokes, improvising, answering questions and putting down / smiting hecklers. Be the first to see this amazing show before it goes global! Book early! Free whistle if you can work out how he does it. 'Genius' (Radio Times). 'Incredibly, achingly funny' (Daily Mail). 'Breaking boundaries in stand-up comedy' (Independent).

Multi award-winning comedian and animator Howard Read is one of the most original artists to perform at the Fringe and the first to ever use animation in live comedy. Hide and Speak is a totally unique comedy experience where Howard's own latest technology makes it possible for several cartoon characters to literally come to life and improvise with a live audience. There's even a free whistle if you can work out how he does it...

Howard is best known as the other half of the animated six-year-old virtual stand-up comic Little Howard, who will also be appearing at the Fringe this year, and together they have appeared on some of the biggest TV shows on three continents, performed in front of (and insulted) The Queen, been nominated for The Perrier Award as well as winning and being nominated for numerous other awards, and had three series of the award-winning and critically acclaimed Little Howard's Big Question on BBC One, BBC Two and CBBC. Their unique live shows, adaptable to both adult and family audiences, have toured the land and the comedy festivals of the world. They also create unique bespoke events for charity events and corporate clients.

When Little Howard has gone to bed, big Howard has been busy creating critically acclaimed characters on TV and radio for the likes of Richard Briers, Rik Mayall, Mark Gattis, Una Stubbs, Rula Lenska and Tim Brooke-Taylor. He has appeared on The Tonight Show with Jay Leno and various programmes on BBC Radio 4, animated on several tours for Ross Noble and written two children's books.

Be the first to see this amazing show before it goes global! Book early!