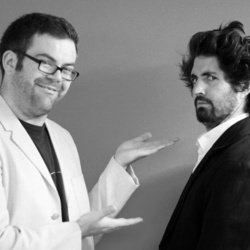 Musical Comedy Awards hosts Horse & Louis present a selection of the best comedians, sketch acts and musical / character comics on the Fringe performing for your delectation and enjoyment, for free. Meanwhile, you: Jonny audience member, and you: Jenny Punter, will have the chance to win a bucket full of cold, hard, actual cash in a game of visual bingo. Buy a bingo card, see the things written on the card happen onstage and win money! Horse & Louis reviews: 'Excellent' **** (BritishComedyGuide). 'Very funny' **** (ThreeWeeks). 'Silly' (Chris Tarrant, BBC Radio 2).

Eyes down and get your blue rinse ready for the smash hit of this years' Edinburgh Fringe, Horse & Louis' Comedy Bingo!

Musical comedy duo Horse & Louis are heading to the Scottish capital for a back-to-back bingo bonanza, with an array of award-winning special guests, ludicrous comedy sketches and other shenanigans - all while the audience battle each other for cold, hard cash prizes of up to £500 in a game of visual bingo.

This is bingo with a twist and a slice of lemon. Yes, it's still taking place at a huge, real-life, working bingo hall in the heart of Edinburgh. True, there are still cards, dabbers, big prizes for a line or a full house... The only thing missing is the numbers. So you're not looking out for 13, 21 or 88 any more, you're looking out for 'Ape in a toga', 'Light aircraft' and 'An awkward situation involving broccoli'. HOUSE!

An event not to be missed and one like no other on the Fringe this year.

Horse & Louis have been performing together since 2008 and are fast establishing themselves as one of the most consistent and distinctive musical comedy acts on the circuit. They are regular comperes of the Musical Comedy Awards, having been runners-up to Abandoman in the 2010 final, have hosted shows for TimeOut and headlined last year's Stand Up For Comic Relief show for BBC South East. The duo have also performed as themselves on BBC Radio 2 and BBC Radio 4 Extra, whilst both Horse and Louis could be seen acting on BBC Three earlier this year in Lee Nelson's Well Funny People. Comedy Bingo will be their third full-length show of 2013, following sold-out runs at the Brighton Fringe and Machynlleth Comedy Festival.