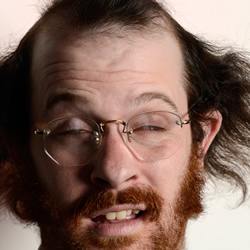 Harry Deansway is proud to announce the news that no one has been waiting for, his stand-up debut Wrong Way at this years Fringe.

Harry Deansway is proud to announce the news that no one has been waiting for, his stand-up debut Wrong Way at this years Fringe.

The former editor and publisher of the UK's favourite comedy magazine The Fix will be using all the knowledge accrued from ten years watching and writing about comedy to put on a show biz extravaganza the likes of which, being a comedy journalist, you probably will have seen before.

Renaissance man. Impresario. Bit of a twat. Just some of the words Harry has used to describe himself in this bio. During his time in the comedy industry he has published and edited the UK's longest running nationally distributed comedy magazine The Fix, been the comedy editor for the Guardian Guide, directed several sell out critically acclaimed shows and what at this stage seems like the high point of his career appeared as a panellist on Loaded TV's flagship book show Lads Lit.

He currently oversees online comedy channel Raybot and hosts and produces his hugely popular residency Shambles in London. At the time of writing this he has recently returned from 6 successful dates in New York. He doesn't know why he has written this press release in the third person.