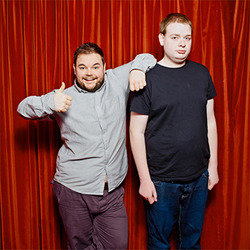 Griff Rees Jokes is the combined force of the multi-award-winning 'original comedy mind' (Guardian) of Matt Rees and 'the next big thing' (FHM) Lloyd Griffith. Matt was tipped as Time Out's One to Watch for 2013 as well as being named the undisputed rising star of Welsh comedy while Lloyd has made waves on the circuit as 'inherently funny ... the voice of an angel, body of a trucker' (Chortle.co.uk). Catch these two critically-acclaimed performers in this double dose of standout stand-up.