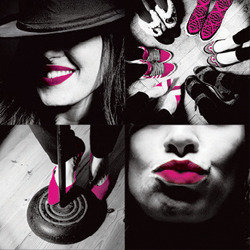 Ten days of brilliant programming to tickle your comedy taste buds and prove beyond all doubt that women really are very funny! Funny Women is the UK's leading community for female comedy, helping women to perform, write and do business with humour, and has created a unique boutique Fringe environment. So enjoy a cocktail or two and take your pick from a daily programme of comedy and variety shows, panel discussions, semi-finals for the 2013 Funny Women Awards, workshops and more. 'Women who make you laugh - what could be better?!' (Cosmopolitan).

This August Funny Women, the UK's leading community for female comedy, is reviving the pioneering spirit of the Fringe by hosting its own venue as part of the Edinburgh Fringe Festival. The first ever Funny Women Pop Up Fringe, in association with Benefit Cosmetics, will take place at Le Monde Hotel in the heart of Edinburgh's New Town on George Street from Friday 16th August to Sunday 25th August, with a preview day on Thursday 15th August.

For the first time at the Edinburgh Fringe, Funny Women will be offering a unique day pass for visitors to their venue. The pass offers access to as many shows and events as guests can fit into any one day; that's up to ten shows for just £25! And they don't stop at stand-up; pass holders can also enjoy comedy drama Touched... Like a Virgin, panel and line-up shows, as well as Funny Women Awards semi-finals, comedy workshops, shows by 2012 Funny Women Awards winners and finalists including Gabby Best, Sooz Kempner, Viv Groskop, and Leanne Davis, and solo shows from some top new and established female acts including Phoenix Nights star Mrs. Barbara Nice!

The play Touched...Like a Virgin written by award-winning playwright Zoe Lewis and produced by Funny Women will be making its Edinburgh debut starring Olivia Lee (Balls of Steel and Dirty, Sexy, Funny) after a successful run at the Soho Theatre in 2012. Touched takes a gut wrenching look at the thirty-something dilemma with a soundtrack sung by 2012 Funny Women Variety Award winner Sooz Kempner. Expect pop hits, artificial insemination and tears.

Funny Women is curating daily Comedy Showcases to give Fringe visitors a taste of the talent presented at the company's regular showcase nights at the Leicester Square Theatre in London and Komedia in Brighton. Expect a different daily line-up of the best new and established female comedians at the Edinburgh Fringe each day.

Funny Women is also bringing two of the Funny Women Awards semi-finals to the Fringe. With previous winners and finalists including Susan Calman, Bridget Christie, Andi Osho and Katherine Ryan, Fringe goers could be in with a chance to see the next big thing before she goes stratospheric!

Successful journalist and stand-up comedian Viv Groskop's show I Laughed, I Cried details the moment of madness that led her to perform 100 gigs in 100 nights in a bid to work out whether she could hack it as a stand-up, and Leanne Davis will regale the audience with her Hobo Adventures. Zoe Lewis, author of Touched, will be presenting her provocatively titled show Fat Chav, whilst Ishi Khan Jackson will share with the audience I am Happy.

For those looking for something different from the traditional stand-up format, Funny Women offer several alternatives. Canadian comedian and improviser Courtney Cornfield will be keeping parents and children entertained with Funny Mummies, an improvised show where the kids make up the story! A daily panel discussion show with a rotating mix of comedians, writers and promoters will give an insight into working in the comedy industry, amid many amusing personal anecdotes. And if that wasn't already enough, guest-hosted Funny Women Workshops will be held on weekends in storytelling, comedy writing, improvisation and stand-up!

All events will take place in the elegant Le Monde Hotel's Shanghai Club Room, a popular venue for cocktail lovers with an equally impressive menu that audience members can enjoy; Funny Women ticket holders will receive a 10% discount on all food and drink purchases. There will even be bespoke Funny Women cocktails to make the nights (and days!) go with an extra humorous swing.