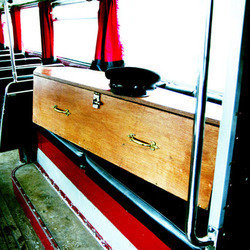 Roger Cocksweets is dead. In his will he asked that his funeral take place on the very bus he was driving when he died. Now you are invited to take part in Roger's funeral. Step onboard a fantastic classic 1960s Routemaster bus for a hilarious comedy show while travelling around the city. From the makers of The Ghost Bus Tours comes this unique comedy experience like no other at the Fringe - see the city while watching the funniest show in town.