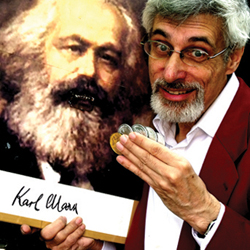 The latest show from Ian Saville, socialist magician. Ian investigates the real meaning of money. Where does it come from? Do we really need it? Ian consults experts, and his financial adviser, who turns out to be a dummy. Stunning magic, great comedy. Ian has spent 30 years developing the genre of socialist magic, delighting audiences with unique illusions, ventriloquism, comedy and theatre. Despite his obvious talents, Ian remains skint. This show explains why. 'Would make the hardest liner laugh .... Ideologically sound and magnificently bonkers.' (Independent).