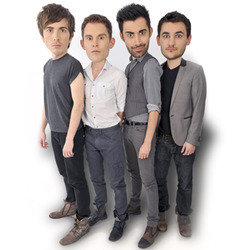 Fringe favourites Four Screws Loose return with an explosion of comedy not to be missed! 'Had me crying with laughter ... pure comedy gold' ***** (ThreeWeeks). 'There's comedy, there's singing, there's dancing ... had the audience laughing hard' **** (Scotsgay). 'Solid hit after solid hit... Brilliant' **** (Comedy.co.uk), 'Fearless ... had the audiences rolling in the aisles' ***** (BroadwayBaby.com). 'High-energy, original and impressive skits ... turns the hugely mundane into the highly amusing' **** (InformedEdinburgh.co.uk). 'Better than a turd' **** (FringeGuru.com). New Act of the Year Finalists 2013. Buckle up and prepare yourselves for Screwtopia!

Fringe favourites Four Screws Loose return for their fourth exciting year at Edinburgh Fringe Festival from 1st - 26th August at The Assembly Bosco Tent, so buckle up and prepare for SCREWTOPIA!

Directed by Matthew Jones (of Frisky & Mannish) prepare for a world screwed with ludicrous characters, outlandish music and spontaneous dance-breaks.

See the Four Screws Loose boys in an epic James Bond film made entirely from mashed-up song lyrics, a supermarket extravaganza set to the score of Les Miserables and a love affair between two very unforgiving spiders, these are just some of the treats in store in what is The Screws' most varied and titillating show to date. This is an explosion of comedy not to be missed!

Critically acclaimed comedy group Four Screws Loose (New Act of the Year Finalists 2013), featuring Richard David-Caine, Joseph Elliott, Thom Ford and Conan House. Formed in 2009 they have since thrilled audiences up and down the country. They made their Edinburgh debut in 2010 with Latecomers Will Be Shot!, playing to full houses on every performance, and repeated the same critical and audience response at the 2011 and 2012 Fringe Festivals with their highly anticipated follow-up shows, Screwed Over Again and #screwtheworld. Their accomplishments include a three week hit London transfer at the Warehouse Theatre, a sell-out residency at the Leicester Square Theatre, rave performances at Bestival and Latitude festivals, a BBC televised performance on Scott Mills' Fun and Filth Cabaret and a run at the Soho Theatre. They are currently developing exciting projects for TV and the internet.